Who Is Azazel? This Will Change Everything - Pt. 1

Some months ago I wrote a blog in regards to new knowledge Azazel gave me about the connection of his name and the name Baphomet.

For the last few months Azazel and other Entities under his authority, when he could not be present have shared with me information about who Azazel is, his origin and other teachings. They have also helped me to do some deep research on this very subject.

I know, some people may think that I’m just going to touch on the same recycled information that many have written about, even those that claim to have direct contact with Azazel himself. This information I talk about, can be found in the Old Testament of the Bible and the “Book Of Enoch”. This is not what I will be sharing with you here.

This is also one of the ways I know if someone who says they are communicating with Azazel, really are doing so. If it shows in their writings that they are just drawing their information from these sources mentioned above, yet say that Azazel shared the information with them. A lot of  these writers mostly aim their writings at an audience that are very new to the Occult. However, those that have been practicing or researching the Occult for sometime, should at least know of the sources of this information. To know that it’s not coming as fresh information from Azazel to the person claiming it is.

Anyway, enough of that. I just thought I would add it here. As it was related to Azazel and in fact Azazel wanted me to mention it. Azazel does not want these people claiming to be in a relationship with him, along with the rest of us.

In my workings and communication with Azazel, he does not always come due to other commitments. Instead Azazel will sent to me one or two of the Entities under him.

This is another thing, I have seen YouTube videos by occultists, Magickans who claim they are always calling and working with Azazel. As if he has got nothing else to do in the whole wide world or universe for that matter. I find this very hard to believe, from my own experiences in working with Azazel.

One of the Entities Azazel has sent me instead gos by the name of Kézel. After Kézel came to me for the first time, I must admit, I was going through all the Angel names and Demon names of Demonology and Angelology I could read. I was even going through the names of the Watchers mentioned in the Book Of Enoch. I found a name of an Angel called kesil and this was the closest I was going to find. On doing a little more research online, I then found out that the God Orion in Hebrew was called Kesil.

By this time I was getting excited, could it be that I had quite by accident stumbled on the fact that the Angel Kesil and the God Orion were one and the same being. I then told myself "You know there is no such thing as accidents and everything happens for a reason".

Many years ago now I was given the name Orion as my Magickal name in a dream by some spiritual Entities. I was told to use the name Orion Silverstar in all my esoteric practices and I would have great power and abilities. I was told that this was the names they had chosen for me. I was also told many other things in relation to this name and who I was as a person, which I might save for another blog. However, one of the things the Entities in the dream made clear to me. Was that more meanings to this name would be come clear to me in the future.

Is this what the Entities in the dream were talking about? I wondered?

I was now looking forward to talking with Kézel again about this matter.

The next time Kézel came to see me on invoking Azazel, I wasted no time in expressing my thoughts to him. To my shock and amazment Kézel told me that Kesil was in fact another pronounciation of the word Kézel. That Kézel/Kesil were both this Entities name. I then said to the Entity that their name as Kesil was the Hebrew name for Orion. I then asked Kézel if he in fact was the great God Orion, to which name I was told to take as my Magickal name in a dream some years ago?

If this was so, then this would be more evidence that ancient Gods and Goddesses were turned into Angels and Demons by the early Church Fathers. Or could it also be that what we think are Angels and Demons, are really Gods and Goddesses? My mind was going into overdrive with all this information, knowedge being revealed to me and the many thoughts it created. Not to mention the implications this would have. If Kézel/Kesil was in fact the ancient God Orion, why was he serving under Azazel? An Angel, a Watcher?

Where was this heading? I had to ask Kézel/Kesil more. I needed to know, I was hungry for more answers to my many questions.

On asking Kézel/Kesil if he was the mighty God Orion, his answer was a direct...no. This did not make sense to me, why would Kesil be the Hebrew name for Orion then? I asked. Kézel/Kesil then told me that it was in error. That he Kézel worked under mighty Orion. That his name Kézel could be separated into to names to give the meaning of his name and the role/job he has.

I thought to myself, just as the names of other Angels/Demons have a meaning and the meaning of their names is the roles they play. I learnt this knowedge years ago, that if I needed something done. To find out which Angel specialized in what? The meanings of their names reveal this.

Yet here he was coming to me on behalf of Azazel? Kézel himself told me he served under Azazel. Can he serve under two higher spiritual beings? I asked Kézel this very question, as things were getting very interesting for me. This was new knowledge being revealed to me, which I was chosen to recieve.

Now here is what really left me in amazment and suprise at the sametime. Something that changes everything. Something that I would not have seen coming at the start of my communications with Kézel.

He is not a "Demon" nor an Angel. But a Daemon (Divine being) the great and mighty God Orion. The constellation the Giza Pyramids of Egypt line up with. The constellation that Samyaza, one of the Watchers that was a leader with Azazel was said to hang upside down, in Jewish mythology/Astrology.

This was it, the conections were coming together now for me. This was some amazing revelations. I share them here with you the reader. The best was yet to come.

Then the next time I called on Azazel, it was Azazel that came. I explained all these things Kézel had been telling me and Azazel confirmed them with me to be true. Azazel said to me, are you ready for this knowedge i'm about to share with you? I said yes with great egerness to hear what he had to say.

Azazel told me, his true name, Orion means "Nephlia" in Aramaic and the Nephilim are his descendants. His name as Azazel, though sometimes means "The Goat God" also translates to "The Strength Of God" "The Strong God" "God Of Victory".

Now that I have shared these amazing revelations with you the reader. I will from now on be calling Azazel under the name of a God that he is "Orion".

All those years ago, this is why these Entities came to me in a dream and gave me the Magickal name "Orion Silverstar" and said they will give me great knowledge in the future....wow. I would never have guessed.

I said to Orion, but are you not a hunter? He said that "there is a misunderstanding in the passing down of knowedge by word of mouth. I was the great teacher in those days, teaching humans how to hunt with weapons among other things".

"We are the "Apkallus" but the humans called us "Watchers" the meaning "One Who Watches" or "Those Who Watch" is not a good translation. I am not a guardian, but a God. We are not caretakers of your world, but teachers. The translation "Those Who Do Not Sleep" or better still "Those Who Are Awake" fits our description. It could be said that we are "The Illuminated Ones" or Enlightened Ones" "The Shinning Ones". Another name we have been called is "Grigori".

However, I was told that the word "Grigori" was an insult by the early Jewish scribes who demonized Orion (The Gaint God) and others that came to our world with him. I have also been told by Orion that the Old Testerment and even the Book Of Enoch accounts about these beings are not to be trusted. As they have both been written by ancient Jewish scripes set on Demonizing them.

I further learn't through my own reaserch that the only true Book Of Enoch was dictated to John Dee and Edward Kelly by the "Enochian Angels". So far only a small part of it has been translated. The Enochian Angels told John Dee, that once it is transated and activated. It will be so powerful as to bring about the apocalypse.

You will notice in this list, that a few things are different than what comes from the early Jewish Scribe versions. For example, Woman did not enchant Men through makeup. This in fact was an attack on Women from other cultures and customs by the deeply religious Jewish Scribes. Even today, in places of the Middle East. If a Man sexually assaultes a Women, it's the Womens fault for enchanting him. As for the makeup itself, it was not like the cosmetics we have today. It was more to do with different tribes and Gods/Goddesses honoured.

This concludes part 1 of "Who is Azazel? This will change everything".

If you found this writing interesting, please share this work with others and leave a comment thanks. 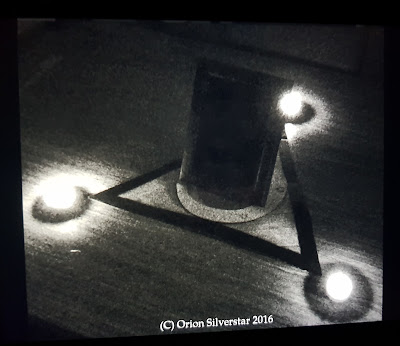 Ref. The researched information on Barbatos was taken from a book I own called "The Testament Of Cyprian The Mage" by Jake Stratton-Kent. Scarlet Imprint Publications. www.scarletimprint.com