Most who work in the arts Magick will know how important and sacred plants and hearbs are. Also how these aspects of living nature should always be respected with the utter most respect.

I myself have always had a very deep connection with trees, plants and nature in general. I enjoy going for walks in a forest and nearly always feel the presence of spirits there. Not only this but I enjoy the peace and quietness that can be found there, to do meditative work.

Just recently the spirits I have been working with have inspired me to take a bigger interest in my garden and in gardening as well. Now I have a few plants that are coming along really nicely. Some of these plants I have a special bond with and talk to them often. I will be found often transfering my energies and thoughts into them to help them grow.

This is something that ancient indigenous cultures used to do and in some cases still do.

On doing this myself, I have found that it has really helped lift the spirits of the plant. I had a few plants that were starting to die, after going overseas. I came back to find them in this state. I spoke to the plants and told them how much I loved them. I then closed my eyes and focused and visualized my energies going from my heart Chakra, through my hands, into the plants. The first week nothing, so I said to the plants with so much emotion, as I would a friend that was passing away. Please just show me some sign of life and I will be happy. The next week I was so happy to see new growth on the plants. They still have a long way to go, but my time with these plants has definitely helped. I then took some offerings to draw nature spirits to the plants and set them in action to work with the plants some more.

One of the offerings I gave was strong alcohol, Rum. The reason this type of alcohol was given, is not because these spirits like alcohol to drink. But because of the heat from the alcohol. The reason we give offerings to spirits in the first place is due to the energies they feed off from it. When giving alcohol as an offering to spirits, it is called in my practice "Heating Up The Spirits". They take this heat from the alcohol and turn it into energy. This helps them go to work much more faster. In other words, it fires them up. If you want a spirit to take action a lot faster than normal, giving strong undiluted alcohol is a great way of doing this. This is just one of the secrets of Magickal practice.

As I say, all plants need to be respected and the spirits that are attached to them. Because every plant and tree has one or more spirits that belong to it. Like I said, I have the utter most respect for all plants. But I have a very special respect for native trees and plants in my country. This is not only because the plant itself is a living thing. But also because these plants and trees have native spirits connected to them. Also more often than not these native trees have indigenous spirits that owned the land I now walk on.

When it comes to sacred plants and especially herbs, the Tobacco plant is no different.

In many indigenous cultures Tobacco was held in the greatest regard and respect. These people were well aware of the Magickal properties and spirits connected with each of these plants. The customs of working with the Tobacco plant were often told by word of mouth from generation to generation. This was done in the the form of traditional rituals and ceremonies involving the Tobacco plant.

They also knew of the fate of those who abused the seacred Tobacco plant. Regardless of this, over time the teachings were ignored. Then corruption set in due to commercialization and addiction. This in turn brought about many diseases of the body. One of the main reasons for this corruption in the Americas was due to the Christian Church. Taking the next generation of young  indigenous children and putting them in strict Christian settings where native practices were forbidden. The Governments also brought in laws in connection with the Church to put a ban on their practices.

The Christian religions through the help of the Governments have done a lot of damage. Damage that in some cases can not be fixed. They have destroyed peoples ancient traditions, a lot being lost in the past, plus their culture, practices and heritage. This is largely to do ignorance in relation to the Churches teachings.

However, some tribes decided to continue with the teachings of plants and hearbs, and in this case Tobacco in secret. Sometimes they had to substitute normal cigarettes for traditional Tobacco for their ceremonies. Traditional Tobacco was pure and home grown Tobacco, without any cemicals added.

Some Tobacco used the indigenous peoples did not have any nicotine at all. Such plants as the dried leaves of the Bearberry tree were used. Along with the bark of the red and spotted Willow tree. These plants were not smoked at all in their ceremonies. When Tobacco was smoked it was not inhaled into the lungs.

A lot of these practices, I also include in my own occult workings.

Dried Tobacco as a powder was also sprinkled on and around a car to make sure they were safe when travelling long distances. Presenting a gift of Tobacco was often practiced when a deal or contract was being made, to make the deal more binding.

Again this is something I also have done on making the pact with my now Patron Deities.

Often tribes would talk to the Tobacco plant and empower it with their thoughts and energies.

This is something that I metioned earlier in more detail, that I also practice.

Within my own occult practices, Tobacco is used in almost all rituals and ceremonies. I never use the manufactured cigarettes, when using Tobacco smoke blown from my mouth. However, I do use manufacured cigarettes, cigars and loose Tobacco as offerings.

I used to be a smoker, having smoked cigarettes for many years on and off. I still breath smoke of Tobacco into my mouth through a pipe, that I keep on my main Altar or on a string around my neck, plus some gigars. However, I do not let it pass down into my lungs.

After being a smoker before, is it possible to cross the line again? Yes.

But I have learnt to respect Tobacco as a sacret and spiritual plant and this helps me. I have great respect for the spirits that are around me and that I work with. I do not wish to suffer their diapproval, as I know the outcome of that. Also it comes down to having a strong will power that I have mastered through occult practice.

In my practice, Tobacco is very much connected to some of my Patron Deities. Two of which are San La Muerte / Qayin and La Santisima Meurte / Qalmana.

As I'm sure the name is different for each culture. One of the names for the Tobacco spirit in the Qayinite tradition of Witchcraft is called "Amiahzatan". The spirit of Tobacco can sometimes be seen showing his form within the smoke. Twisting and turning in the form of a serpent.

The spirit of Tobacco can be directed, focused, channeled, Evoked and Invoked through the smoke of Tobacco. Not only this but tinctures, infusions and oils connected to Tobacco can also bring about the above results.

The spirit of Tobacco has the authority over lesser spirits and also can aid in conjuring, calling, summoning the dead. In fact a pillar of Tobacco smoke can be used in order for the dead to rise up from beneath the ground into your presence.

This is something I use in conjunction with my outdoor shrine to the collective dead (see one of my other blogs in regards to this shrine) and the Gateway Of The Dead sigil and keys, with very good results.

In like fashion the spirits from the higher realms can come down the rising Tobacco smoke into your presence. Through working with the elemental spirits of Air and the Powers and Principalities of the Air. The spirit of Tobacco can allow other spirits that wish to show their forms, manifest.

I use Tobacco smoke as an offering to my Patron Deities. This may be done through lighting a cigarette or cigar and allowing it to burn down on their Altar. I sometimes may just leave a few full unlit cigarettes or cigars on their Altars. These practices I also do with those of the dead, including ancestors and relatives that have crossed over. There are times when i'm working with a Deity or the dead and they request it.

When you start to work with different spirits. You will start to realize that they have different requests, sometimes strange, when it comes to offerings.

Always at my outdoor collective dead shrine. I mention the indigenous Aboriginal spirits. As they are the ones that used to own the land I walk on. Which I have the greatest and highest respect for. If you are able to find out what tribe owned the land you are on helps. I did this so that I could use that name in their honour. Just to make the ceremony a little bit more personal and respectful to them. As it pays to be on good terms with the spirits that reside in and around your dwelling. So this is just another reason why Tobacco can be found on my outdoor shrine to the dead.

Another thing Tobacco smoke can be used for, is to cleanse you aura. However, I myself would rather use Eucalyptus incense or leaves from the Gumtree.

Tobacco smoke also helps with mediumship abilities and can be used in Séances.

Tobacco smoke, through the workings of San La Muerte. Can channel the fires of Mars to bring to action the shades of the dead. Also the coldness of Saturn to take life from the living.

I have used Tobacco smoke blown from my mouth to carry spells throught the wind in the direction of my intended target. Charging and empowering or putting my intent into Sigils or Talismans. Through sound vibration as the Tobacco smoke leaves my mouth to the object is also something I often use. As it helps very much with focus, to visualise the energy leaving my mouth through the Tobacco smoke into a Doll, Effigy,  Talisman,  Sigil and more.

Another thing Tobacco is used for, is dressing a candle. Also dressing cigars with moist Tobacco for Invocation and Evocation of the spirit of Tobacco.

Having said this, I thought I would finish up on a positive note.

The spirit Amiahzatan (the spirit of Tobacco) is an easly offended spirit. He mercilessly punishes those who desecrate his powers. Through the sacrilegious misuse of sacred Tobacco. He first and formost brings curses against the profane who disrespectfully abuse the leaves of Tobacco.

They are : weakness and lack of will power, addiction, often caused by cancer and other related lung and heart diseases.

Before you may not have been aware of this? However, now that the spirits have lead you to read this blog. You are now aware of this, which changes everything. So I ask you....what are you going to do about it if you are a smoker?

The Tobacco spirit "Amiahzatan" and related information. Comes from the book I own called "Liber Falxifer - The Book Of The Left Handed Reaper" by N.A.A 218. 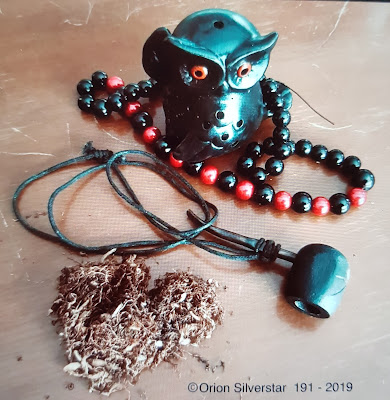