Originally this blog was posted in two parts a few weeks apart within a Magickal online community. I have decided to post both parts of this blog in one.

The word Amparo is a Portuguese and Spanish world which means refuge or shelter.

You may or may not be aware that one of the Deities I honour and devote my time and Magick to is La Santisima Meurte, in her Nina Negra aspect, which is Santisima Meurte's black aspect.

When working with Nina Negra and due to the fact that Santisima Meurte is death herself and has power and authority over the underworld and the dead. Her energies are very potent indeed and can take a toll on you after sometime. For those who practice Necromancy as I myself do, will know what i'm talking about.

I used to practice the Hermetic Golden Dawn for many years and often used the Lesser/Greater Ritual Of The Pentagram/Hexagram (Banishing) to remove energies that stayed around to long or built up over time. The building up of energies over time happen often in places where rituals or Magick are performed on a regular bases. However, in my practices of Necromancy I found these rituals unrelated to this type of occult workings.

I tried other methods of removing this energy build up and other rituals geared towards their removal, without being satisfied in any of them. I needed a formula for dealing with the left over energies of death itself and the residue left over from working with the dead and Nina Negra.

Not that Santisima Meurte is a bad spirit to have in your life, far from it. There just needs to be a balance of energies over time, that's all. And if you are not working that much with other aspects of Santisima Meurte, this balance is well needed.

Not many people know about this when working with the bone lady for the first time. They rush right in to working with her darkside/nightside.

Other websites in relation to Santa Muerte and her nightside may talk about "The Amparo". As this is often known amongst Santisima Meurte devotee's.

However, you may have never heard of this at all. The Amparo they often talk about is a way of balancing out the energies of working with Nina Negra, as I have already mentioned. This is often done by incorporating elements of Catholicism into their workings. As is to be found in a lot of Afro-Hispanic Magickal religions, and the western tradition for that matter. Ancient Grimoires are one good example, Demonology another. The Amparo that is most likely  advised will be that of Saint Michael, on the altar with Santisima Meurte. I have read that Santisima Meurte excepts Saint Michael on the altar with her. Why Saint Michael is the choice as Amparo is due to his warrior qualities of protection.

If you feel comfortable with incorporating Catholicism into your rituals with Santisima Meurte, by all means do so. In this blog i'm offering an alternative to this, one in which you will not find else where.

Maybe it is because after all,  Santisima Meurte does have the word "Saint" in her name. That at one point Santisima Meurte was considered as a saint by the Roman Catholic Church. These days she is seen as a Folk Saint along with many others like, Saint Cyprian patron saint of Necromancy, just to name one.

I don't know about you, but I am uncomfortable with having Saint Michael on my altar in Necromantic, devotional and spell workings with Santisima Meurte. Other Folk Saints I will work with in ritual, however not those directly connected to the Christian religion.

I never could agree with the idea that Michael is a saint. In my opion Angels/Celestial beings that have been around from the beginning of time can not be labeled saints. They were never physical human beings now in spirit that done the Great Work on Earth. What gives the Church the right to label a spiritual being that does not even belong to any limitations of man made world religions.

This is where Azazel comes into the picture for me.

Without going into to much detail here, I will save that for another blog. In the first book of Enoch it talks about Azazel coming to Earth to teach humans how to hunt and make weapons of protection. This to me then puts Azazel in the category of been a warrior God.

Recently I wrote a piece of writing about how Baphomet, another Deity I honour, told me of the connection the name Baphomet and Azazel have with each other. That they in fact are one and the same Deity. Baphomet showed me this in great detail, how the two names are related. Something not given to any other human on this Earth before, till now. To find out how Baphomet showed me this, please checkout my other blog about this thanks.

On top of all this, I recently was told by Santisima Meurte, Nina Negra herself that she was happy to have Baphomet placed on her altar with her. This came about after spending hours in prayer, meditation and fasting at her altar. I later found out, not long after this that Nina Negra has a deep connection with the Saturnian current as does Azazel/Zazel. This was a derect message from them, as the timing could not have been better.

So here is the Amparo with Azazel that I myself have written with their guidance :

To make an Amparo with Azazel, get two blank cards and draw the Sigil Of Azazel on each one in your own blood. Now once the blood dries put the two cards together with the Azazel sigils in blood facing inwards together. Tape the two cards together leaving an opening at the top, so that it becomes like a little pocket. Then go before your statue of Baphomet and say a prayer, Incantation and Invocation to Baphomet. I will leave it upto you as to what you may say, as your own words are often the best. However, make it related to the work you are doing. It does not have to be anything long or complicated, something simple will do. Ask Baphomet to clear away unwanted residue of the death current while working with Nina Negra.

I often chant "Salve Baphomet" over and over out loud first till I feel the presence of Baphomet come over me. While doing this, write your name on a small piece of brown paper and place it within the card pocket. Then place some of your hair, nail clippings within the card pocket. Then blow some cigarette smoke into the pocket and after swirling some rum around in your mouth, dripple a few drops into the pocket. Seal up the card pocket at the top, closing it off completely. Then splash a few drops of straight rum on the back and front of the pocket. Then put it between your hands and pray to Baphomet over it. Try to make the prayer different to the previous one.

Offer Baphomet some cigarette smoke by blowing on the Baphomet statue and spray rum from your mouth over the statue, plus leave some rum in a small glass at the statue. Place the rest of the the cigarette to burn down in front of the statue of Baphomet.

Place the pocket under your statue of Baphomet and as long as it is there, Baphomet will remove any remaining built up energies while working with Nina Negra.

Thank Baphomet for attending your ritual and other spirits that maybe present. Ask them to return to their humble abode in peace, then close the ceremony with "So Mote It Be" or "Amen".

(A lot of people think Amen is a Christian word because it is used in Christianity. However, it's origans are to be found in Egyptian prayers and the word is connected to Amun/Amen-Ra.

Keep this pocket charm so no one else can touch it. Bring it out every now and then and pray over it once more as before. This is so that it remains charged.

Now some people have questioned my motives for placing Baphomet and Azazel under one banner. The people that have done so only read this blog and not the blog where I explain how Baphomet directly showed me this and explained it to me. Some have questioned if I really have had a direct communication. I just wish to say that just because you may not have had the experiences I have and still do, does not mean what I say is not fact. Those that have followed my Facebook page over the years will know by the evidence I present. I in fact do have a very strong connection with spirits and that they have my full respect. As I am a deeply spiritual person and it impacts every part of my life.

Having said that, lets begin.

Instead of placing the pocket underneath the statue of Baphomet, it is placed upon the Sigil Of Azazel.

Instead of spraying alcohol from your mouth onto the statue, it is sprayed upon the Sigil  Of Azazel.

Instead of placing tge offerings to Azazel at the feet of the Bophomet statue, they are placed in the Azazel Sigil.

I think you now get the idea.

I would suggest that you use the Sigil Of Azazel rather than the Sigil Of Baphomet. Even though I have explained in another blog how Baphomet and Azazel are one and the same.

The reason I say this is because this ritual is called "The Amparo With Azazel" and the Sigil Of Azazel's connection with the Saturnian current and indeed La Seńora Negra.

I also will mention that both the rituals in Part 1 and Part 2 are best performed on a Saturday, in the first hour of Saturn, which will be somewhere after 12am Saturday  morning.

Dedicate 6 black candles to Azazel and anoint them with oil especially for Azazel.

Draw apon the ground the Sigil Of Azazel in dedicated chalk as you see in this picture in this blog. When I say dedicated chalk, I mean chalk that has been purified from all other energies and then prayed over to Azazel, plus chants to Azazel.

Everything you use has to be dedicated to the Deity/Spirit you are wishing to attract or working with. This is very important in any working, even the simplest things like a quill or a pen used to write Sigils should be set aside and only used for that Deity/Spirit invoked or evoked. Do this and you can't go wrong and the spirits will see that you are serious in your workings.

This now represents your statue of Baphomet/Azazel.

The Prayer To Azazel :

It is you whom I adore, you whom I love, you whom I follow O Earth fallen star. Bright son of the deep. The eternal flame from the unseen fire. O Pentagrammaton. My master, my love. The inner most being of my soul !! I beseech you, O holy one, to lead me in my work and to keep me on the path that leads to your inseparable unity.

And truly I want to purify myself and keep in your word.

The "Prayer To Azazel" is from the book called "Fosforos" by Johannes Nefastos. Weblink :
https://www.azazel.fi/en/ 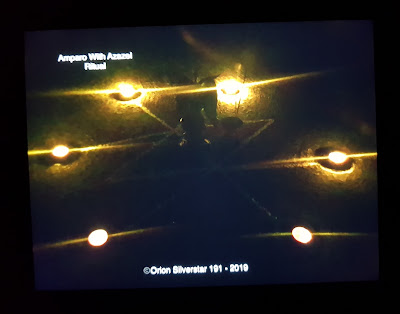 Except where mentioned, copyright Orion Silverstar 191 - 2019.