I wish to share with you something new in regards to Baphomet and Azazel.

This is not going to be another write up on the history of Baphomet and Azazel in relation to each other. As there is many articles already written online by others on this subject.

What I will say firstly on these two spiritual powers, is that nether of them are Satan, in the Christian understanding of these beings. As this is in fact false information from an ignorant source.

What no one to my knowledge has done, is made a further connection to the names themselves.

This is what I am about to do, for what I believe is the first time. This will then give more solid evidence, that leaves me no doubt. Both Azazel and Baphomet are one and the same being.

How do I know this? Because working with Baphomet through invocation, Baphomet showed me.

I was told, and I quote from Baphomet "Azazel And I Are One". I then did not just except this and questioned Baphomet some more, asking for a clear explanation. I said to Baphomet "Can You Show To Me That You Are One And The Same Being?".

Baphomet said that the letters of that name are 8 in total. Useing the table just metioned, I was told to take the letters of the name and to note what number fell under them. The numbers were 2,1,7,8,6,4,5,2 then add them altogether, which is 35, then add that together which comes to 8. The same number as the amount of letters in the name Baphomet. I was told that this was the number of the name. I was then told to do the same for the name Azazel, just as I did for the name Baphomet. The numbers are 1,8,1,8,5,3 which is 26, which is 8.

I was told that this was the number for both the names. That the number 8 is what linksxthe to together, for those that want solid evidence. I was told to share this knowledge with anyone who will be the importance of this work.

After I got this knowledge from Baphomet. I was reading an online article from someone who said that they had 35 years experience as an occultist. They were talking about the history of Baphomet and Azazel and some of the other names I mentioned above. What was very interesting to me was that tbey started their article of with tge words "While Tbere Is No Evidence To Link The Name Baphomet With The Name Azazel".

Well now there is.

I have Baphomet for this knowledge shared with me and now the reader.

Some of the importance this knowledge brings is to much to share in this one blog. However, I will share a little with you all. Most of us who have worked pkanetary Magick will know that Azazel is not just one of the Watchers from the "Book Of Enoch", but also a spirit of Saturn. So having this knowledge, this now places Baphomet in connection with the Saturnian current. This also places Baphomet in Binah. This now opens a whoke new doorway where Baphomet can be worked within Magick.

I will finish up with one more thing, as the Saturnian current/energy is also connected to death and the underworld. This also now places Baphomet/Azazel in the position of a "Gatekeeper" Entity. Just like Papa Legba, Ishtar, Hecate and many others that work with the dead.

I hope that you have found this blog interesting. Please feel free to comment and share this work thanks.

Picture : One of my many altars. 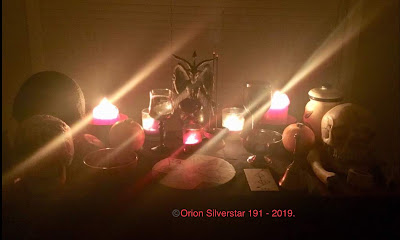